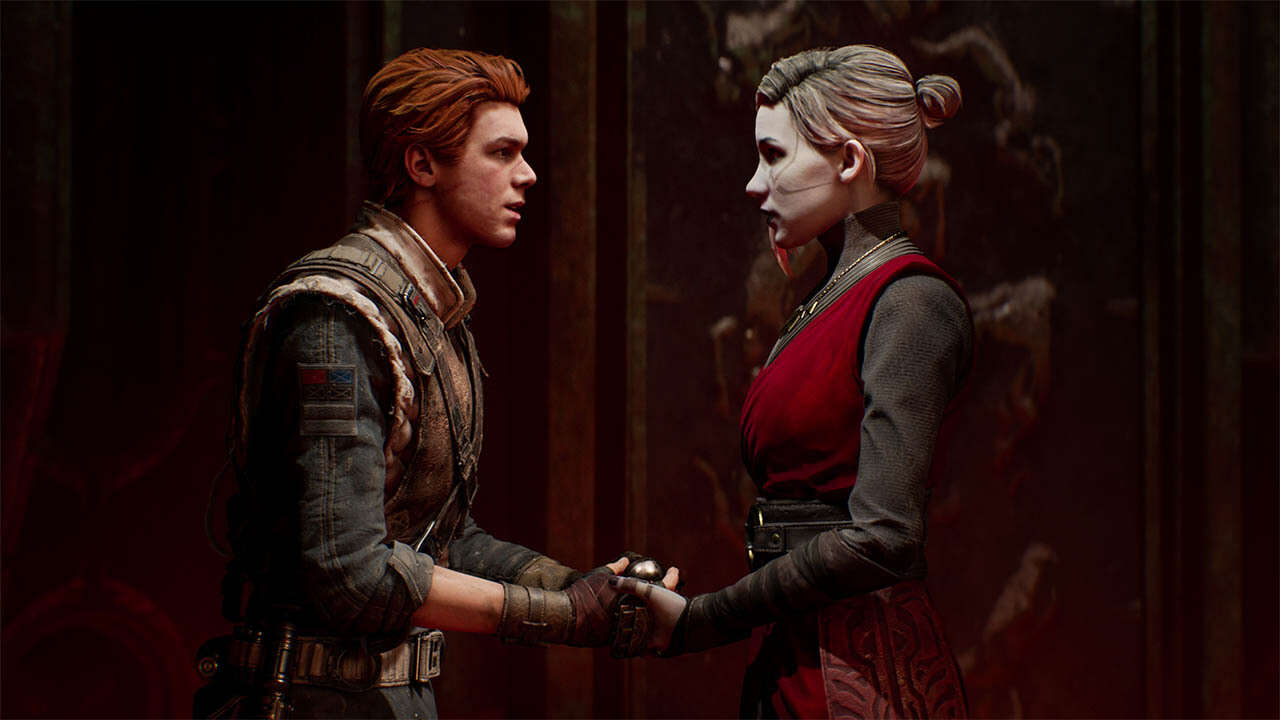 Reports that an announcement for a sequel to Star Wars Jedi: Fallen Order is coming this year is welcome news to me. Playing through Respawn’s Star Wars action-adventure was one of my favorite experiences from 2019, so I’m excited at the potential of continuing the adventure of the Stinger Mantis crew. But if I could make one suggestion for a sequel, I think Respawn should switch up who the protagonist of the next game is. Instead of Cal, we should play as Merrin.

In Fallen Order, Merrin is one of the last surviving members of the Nightsister clan of Dathomir. The Nightsisters are basically space witches who utilize a variation of Force sorcery to perform arcane-like magic, of which Merrin seems particularly adept. After Merrin meets Cal, the two bond under the shared belief that they’re the last of their respective orders, and she joins him and the Stinger Mantis crew in their fight. She adds some wonderful levity to the crew dynamic, and actor Tina Ivlev does an incredible job voicing and portraying Merrin as this adorable, socially awkward person who hides that side of her with a dry sarcasm.

It’s time for Star Wars games to get weird, and what’s more delightfully weird than playing as a space witch? As Nightsisters are essentially just witch-like variations of Jedi, Merrin would most naturally fit the established gameplay mechanics seen in Fallen Order. In the game we see Merrin utilize her powers to telekinetically move objects, so she already kind of has Cal’s Force Push and Pull. Her ability to teleport to hard-to-reach places is a natural replacement for Cal’s double jump as well.

But it’s where Merrin differs from Cal where I think Respawn could implement some intriguing new gameplay concepts. Merrin has demonstrated the ability to raise the dead, enhance the abilities of others, cloak objects, and fling ichor as deadly blasts–and that’s just what we’ve seen. If Merrin is anything like other powerful Nightsisters, she’ll possess additional skills like the ability to overpower weakened minds so they submit to her will. Nightsisters are typically exceptionally athletic too, excelling with melee weapons and bow and arrows. And as most learn how to brew both helpful and harmful potions, Merrin could possess a knack for creating beneficial salves and deadly poisons.

Basically, if Respawn wanted to make a version of Fallen Order where you played as more of a Dark Side user than a Jedi, but ensuring that you’re still a hero, then Merrin fits the bill perfectly. I think that will help keep a sequel of Fallen Order from feeling too samey. Plus, it keeps Respawn from having to come up with some strange reason as to why Cal would have to relearn abilities he should already know from the events of Fallen Order (I put up with it for Samus, but Fallen Order is no Metroid). Transition Cal into more of a teacher role, where he’s passing on the skills he learned in Fallen Order to Merrin–allowing her to mix together Jedi abilities with the sorceries of a Nightsister.

Also, between you and me, I’m just so, so, so tired of playing Star Wars games as a human. The Old Republic offers a nice variety, but most modern day Star Wars games see you play as humans–Battlefront II, Fallen Order, Squadrons, and (presumably, unless there are plans to change character customization) Aspyr’s upcoming PS5 and PC Knights of the Old Republic remake all feature human protagonists. It’s been done. We have repeatedly seen the universe of Star Wars through the eyes of humans. We don’t have to keep writing those stories.

A sequel of Fallen Order starring Merrin is a safe way to mix things up, seeing as Nightsisters are still human-like. But at least they’re still alien in appearance, and that opens up a ton of possible storylines that Respawn could explore that many Star Wars games don’t. Especially if the sequel takes place just after Fallen Order’s campaign, when the Galactic Empire is still at its height so Palpatine’s xenophobia would have trickled throughout the galaxy. Cal is an outcast as a Jedi, but he’s still human and would thus have more opportunities in an Empire-ruled galaxy than Merrin. How does that make her feel? How does that make Cal feel when/if he notices it? Does that change the dynamic between them in any way? These are questions I need answers to.

In my mind, I see a Fallen Order sequel starring Merrin as a sort of Marvel’s Spider-Man: Miles Morales situation. A potentially shorter game but with a much tighter core gameplay loop that cuts out all of the stuff that felt a little extraneous in the first game (I really don’t want to waste time hunting down slightly different poncho and ship hull colors again), and changing up the combat a bit with brand-new mechanics (Merrin’s witch powers being built on top of Cal’s Force abilities, similar to Miles’ bio-electricity and invisibility powers being built on top of Peter’s web slinging and wall crawling).

In my ideal world, a Fallen Order sequel stars Merrin. But I could see other protagonists taking on that role too, provided Respawn wants to use this franchise as a vehicle for “stories about Jedi” as opposed to “stories about the Stinger Mantis crew.” I’d be down for the next Star Wars Jedi game to be just like what Fallen Order was when it first came out and feature a brand-new, never-before-seen cast of characters. Merrin is still my first choice as a hero though. As the best part of Fallen Order, she deserves to be in the spotlight for that game’s follow-up.