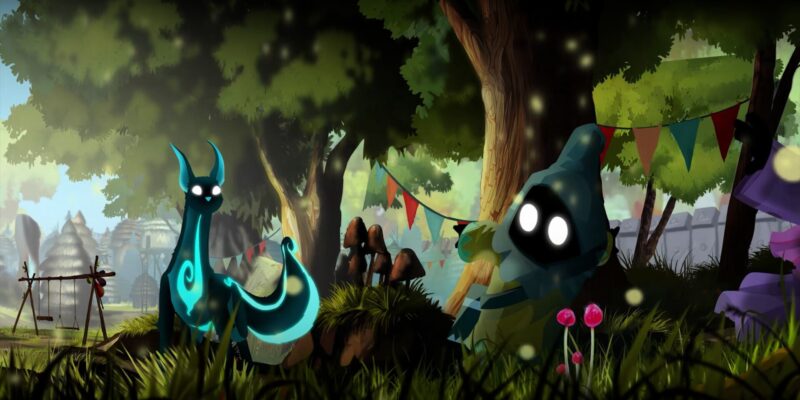 The platform genre isn’t my genre. I don’t dislike the games that fall into this particular category, I’m just really bad at them. One thing that never fails to amaze me though, and the reason I keep coming back and sucking at new titles time and again, is the level of creative genius that goes into these games. We have to remember that when brought back to basics every platformer has a pretty core set of mechanics. You have to take character A and get them to point B while darting about on stationary or moving platforms. This, of course, would have gotten very old very quickly if it wasn’t for the smarts of all the massively brilliant souls out there. In the case of today’s platformer, I’ve been experiencing what Unbound: Worlds Apart has to offer. We’ll be going into the why’s and wherefore’s but this is definitely an experience that I’m thoroughly enjoying not being very good at.

Unbound feels like cartoon-made flesh. The graphics are colorful and the cut scenes are so beautifully animated that you couldn’t be blamed for forgetting you were playing a game at all. Right from the very first moments of this title, you’re pulled in, ready, and really looking forward to the ride. I can’t stress how much the look of Unbound helps the overall feel of this title and this is absolutely something that has to be applauded.

As this is a platformer we’re going to be looking for the mechanics that are going to be setting this title apart from the pack. The things that make us want to spend our time in this world over the many others out there. In this particular case, we’re looking at a very clever little portal mechanic. I’m going to note straight away that we aren’t talking portals like in Portal, these aren’t doorways that we’re creating to jump between points on a map.

Walls don’t exist in two places at once.

The portals in Unbound shift us momentarily into a different world and alter the physics or look of the space that we’re standing in. An example of this might be that in the real world we’re standing in front of a cliff that’s way too high for us to scale, when we shift worlds we can see an array of platforms that make this ascent easy. That reality shift might also alter the laws of physics. Giant pit of lethal spikes before you? Not a problem when you can invert gravity and just run about on the ceiling.

So what makes this game so dangerous if your world-shifting ability literally makes you impervious to traps? Did I mention that the other world was also crawling with demons and other nasty things that would have no concern with eating you on sight? Oh, I didn’t? Well, there’s an invading force trying to conquer your peaceful home and you need to jump in and out of their world if you are to succeed. Things that might be completely benign in the real world definitely aren’t when you switch.

He turns into a block. Just don’t stand close if you’re planning on shifting back into this world here.

To use an example here, there are cute, very unassuming little bugs darting about the place that are totally harmless. Switch worlds and they turn into hell on wings that you’ll really want to avoid. Vice-versa there are some rather ugly looking demons wandering around your world that you absolutely don’t want to be meeting up-close-and-personal. Shift world and these big stabby, one-eyed freaks turn into totally harmless rocks that you can push about the place. Just don’t switch back while you’re standing on one.

The world-switching mechanic is the backbone of Unbound: Worlds Apart and it’s used to great effect. This definitely isn’t something that we see lots of use of at the beginning of the game to pull players in and suddenly get forgotten later. You won’t be able to solve most of the many puzzles without flipping back and forth so it really is a core mechanic that is used to its fullest. This is a Metroidvania so it’s even more important to use this mechanic creatively. As with all games of this type, there are areas of the map that you won’t be able to touch without the right level of skill. What set’s this game apart from other titles in that genre is that the amount of back-tracking needed to do anything is alleviated by cleverly placed teleportation stones. You also have a really handy map that updates as you go so it’s easy to remember areas that you haven’t been able to access yet.

The things I do to get screens for you lot! Yes, this is me getting eaten on purpose!

Unbound: Worlds Apart looks very much like a game for kids. The animation is cute and, for the most part colorful. Looks can definitely be deceiving though. The demons you’ll be facing in Unbound are, for want of a better word, gross.  These baddies were enough to give me, a full-grown adult, the creeps. Don’t get me wrong, this isn’t a gory game or one full of jump-scares, (although having a giant mutant centipede burst out of nowhere and try to eat you is enough to make anyone fill their trousers,) but there is enough in the aesthetic to make you seriously think twice about giving this game to young ones.

In addition to the point that I’ve just made, you can expect to die A LOT. Unbound: Worlds Apart is very much a game of trial and error. Each area of the map feels like a separate puzzle that needs to be solved and many of them will take multiple tries, (and deaths,) before they can be overcome. This is, of course, bearing in mind that some of these puzzles will be impossible on your first attempt as they lead to areas that aren’t supposed to be accessed until later in the game. This is all true to form for a good Metroidvania so all good there. In addition to all of this you only get one life. Don’t expect a health bar or multiples tries; death means death. The up-side of this, though is that you get helpfully dropped back just before you did something stupid so there isn’t the level of monotonous retracing of things you’ve already done before you can get another go.

This map is going to become one of your best friends on your journey.

Unbound is keyboard-controlled. In most cases, I think I prefer gamepad controls for platformers. The reason for this is that a gamepad is generally more precise and all of the commands are closer together. In this particular case, however, I feel that keyboard controls help rather than hamper this title. Unbound feels more like a puzzle game that is also a platformer, as opposed to a platformer with other elements thrown in. With this being said there isn’t the same level of urgency that you get with a lot of action-based games that fall into this genre. The fact that if you die you can just go back and try over removes some of the anxiety you get from being chased around all over the place and means that the controls can be used with more thought and, therefore, at a slower pace. I really like this because at no point did I get that sensation that my fingers were getting tied in knots. The controls are also very simple which helps the overall feel immensely.

I’m really enjoying my time with Unbound: Worlds Apart. This is very much a title that I feel I can enjoy at my own pace. I like the fact that a lot of the time I can stop and think about what I’m going to do next. I also like that when I die I don’t feel like it was on account of unfair difficulty or poor controls. I’m dying because I didn’t run an area correctly and got impaled or eaten. I can comfortably work out where I went wrong and try again. In too many other games I end up feeling frustrated because the gameplay is a little too manic and it’s difficult to move with precision when there’s so much going on around you. Like I said earlier this is more puzzle, less platform, (for me at least,) and it’s the puzzle-solving that shines.

All in all, this is a game that I’d recommend to platform and puzzle fans alike. I’d also recommend Unbound: Worlds Apart to those of you who like me enjoy the thought of being good at the platform genre but aren’t. The mechanics are fun, the game is gorgeous and the puzzles, while hard, aren’t insurmountable. All of these ingredients come together to make a really playable enjoyable title that I’d strongly suggest giving a fair try.

This review is based on a retail copy of the game provided by the publisher.

Unbound: Worlds Apart is a game that’s breathing life into the Metroidvania genre by doing something a bit new. It’s nice to play a game that feels more like a puzzler and less action-heavy. If you’re looking for a new take on a tried and tested theme, this might be a really good way to go. Just remember, for all the cuteness this game brings it’s just creepy enough not to be a title for kids. Viewer discretion might be advised.