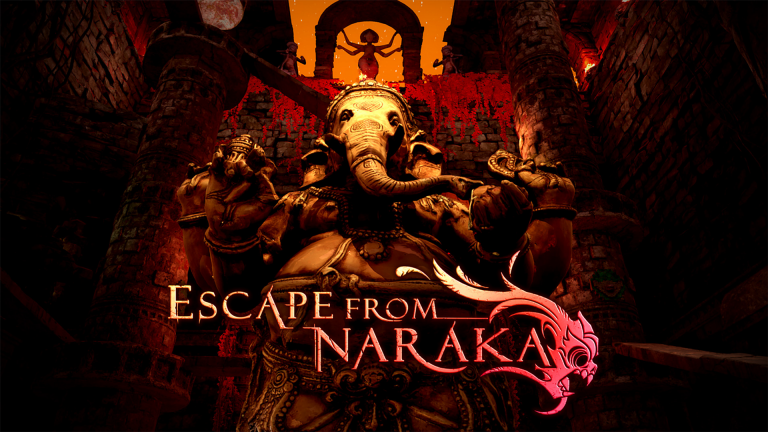 Stories of escape from the underworld have been around as long as the concept of stories themselves across all cultures and religions, it’s a simple relatable concept that can be universally applied. Developer XeloGames delivers a similar tale with a southeast Asian flair with Escape From Naraka; a first-person platforming puzzler that sees the player run and jump through hazardous levels while employing special abilities such as time freezing and teleportation. Each level is basically a run to the finish line as you try to, you guessed it, escape from a hellish place called Naraka.

Actually, the plot of the game is a bit unclear. There are some short slideshow-style cutscenes before and after the game, but there’s not much else to go on, other than the place you’re currently in is bad and you want to leave. Escape From Naraka isn’t very interested in giving a mind-blowing narrative as much as it wants to provide an arcade experience with levels that are meant to be replayed and discovered multiple times over.

After every level, your performance is graded based on several factors such as the time it took you to finish and the amount of health you lost. Your name is also recorded on a global leaderboard so you can see how your runs stack up against the best in the game.

With this in mind, you would think the game would be more interested in giving the player a sense of momentum and speed, so they feel like they are tearing through an obstacle course in a satisfying manner. Think of the free-running in Mirror’s Edge or Titanfall. Those games felt like they rewarded snap decisions and maneuvers that flowed together almost like a rhythm-based experience. In contrast, Escape From Naraka gives you a character that moves at a plodding pace and cannot even see their own feet making it difficult and more time-consuming to line up certain jumps.

While the game is not long, (sitting at only seven levels,) getting through them can be a time-consuming task. A lot of the puzzles and enemy encounters can feel very trial and error on top of the difficulty that comes in navigating the platforming aspect. While a dedicated and patient player could finish the levels in a single sitting, if you’re anything like me you will need to take several breaks to readjust after what will undoubtedly feel like slamming your head into a wall over and over.

In Escape From Naraka, the player character is given three hit points that, ideally, would mean that you can take a few bumps and scrapes on your race to the finish line. However, in practice, most enemies will kill you with one hit, making you repeat runs over again. To be fair, the checkpoint system is applied very well and it never feels like you’re asked to retread too much ground after a failed attempt. The question still remains though, why even bother with a hit point system if damn near everything is a one-shot KO?

This is a compounded issue when you factor in that almost every enemy feels cheaply designed and implemented. For example, there is an enemy that functions similarly to Boo from Super Mario, where they can only move if your back is turned to them. These enemies move so fast that it feels like you have less than a second to turn around before they deal a game-ending hit. The first time I encountered the enemy I thought my game was glitching because I would die immediately after walking through a doorway. On their own, these can be managed but Escape From Naraka likes to spice things up by tossing in multiples of these enemies in the middle of a platforming segment to really get your blood boiling.

Escape From Naraka is a visually striking experience that is marred by gameplay that feels less than fleshed out inside of levels that could have used more fine-tuning. The world feels dark and mysterious, creating a place that would be amazing to explore and delve into. However, the gameplay loop is constantly at odds with this feeling and wants you to move along as fast as possible, or else you’ll fail. The game feels experimental in a bad way where the lack of guidance and questionable planning can make the later levels all trial and error and extremely frustrating.

A beautiful yet frustrating escape

Not quite running at full speed

There are plenty of games that can do what Escape From Naraka tries to accomplish, but the mood and visuals carry the game long enough for you to reach the finish line.