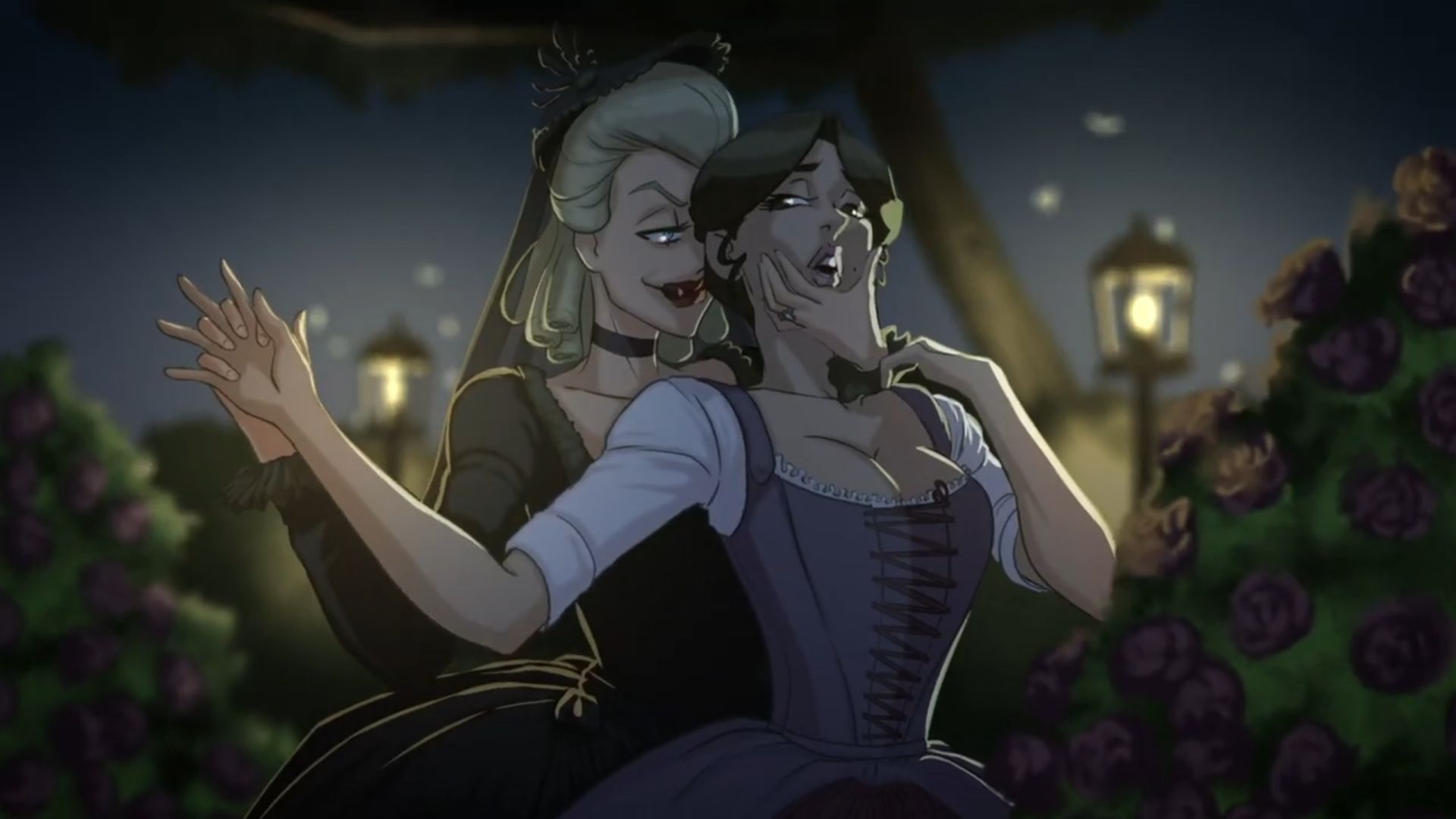 Most visual novels that I’ve played were straightforward: read, make a choice here and there, read, proceed with the consequences of those choices, read, and then get to the ending. However, Ambition: A Minuet in Power throws a lot of gameplay elements found in role-playing games to create a very refreshing entry in the genre. In addition, you’ll also get to learn a little bit about the history of the French Revolution.

Ambition: A Minuet in Power takes place in 1789, and you play as the young Yvette, supposedly betrothed to a baron who has mysteriously gone missing. The story starts as Yvette arrives in Paris searching for her fiance, gets pointed to the baron’s modest home, and meets the house’s caretaker to tell her that she doesn’t know what happened to him either. While in 2021, a missing rich man would warrant the questioning of authorities as well as the coverage of media and Internet sleuths, in 1789, this is just quite normal.

Jests aside, Yvette’s missing baron fiancé is both a critical story and gameplay element. You see, Yvette comes from a modest farm village, with only a handful of money (livre) in her possession. With no financial assistance, she has to navigate the waters of Parisian politics with just her wit. Trust me, it’s not going to be easy.

The gameplay of Ambition: A Minuet in Power are the choices Yvette makes in every single interaction. This is where that RPG element comes in. Yvette has two statistics that you must be wary of: credibility (how trustworthy and influential she is) and peril (how much she is in danger from playing politics or getting caught committing crimes). Some choices in the game utilize a check on credibility, which she can lose some or earn some and some choices can raise (and sometimes lower) her peril.

While these two statistics aren’t correlated, you will want to make sure that Yvette has high credibility and low peril. That’s because reaching a dangerously high amount of peril will warrant Yvette a trip to the guillotine to be beheaded (yes, that macabre portion of French history is definitely a defining feature here).

In addition to credibility and peril, Yvette must also make some moolah. So how does a young Parisian socialite make money back in the day? Well, apparently it’s selling news and old dresses. Let me clarify. Yvette’s status as the fiance of a baron allows her to attend parties from a number of factions ranging from the royals, the clergy, the army as well as the commoners. During those parties, she must dress to impress, as wearing the wrong outfit may shoot down her credibility and put herself in peril with the partygoers. Thus, she must purchase dresses from a shop and regularly swap them out (i.e., sell old fits and buy new ones), since the fashion police are in full effect here; wearing the same outfits numerous times lessens their credibility. It’s really hard to be poor in this game.

During the parties, however, Yvette has a chance of overhearing rumors, and those rumors are literal gold in Ambition: A Minuet in Power. Yvette can sell these rumors to the local tabloid, and the amount of livre she can get depends on how crazy the rumors are. She can also obtain rumors as well as livre from random events during her daily journeys out in the town, but she may also get peril as well.

Thus, Ambition: A Minuet in Power becomes a juggling chore. Not only are you managing Yvette’s credibility and peril, but you’re also thrown with obtaining money to pay for dresses, pay rent, and pay workers (such as the caretaker or others that you might’ve hired to give some power-ups like a tailor that can restore old dresses so that you can wear them longer). Doing all of that balancing act really deters to the main story, which by the way, is still there for you to digest. While progressing the story is up to you most of the time, there are times when there are deadlines to complete a certain task, which really gets complicated when you’re trying to figure out the best tactic to tackle Yvette’s crazy life.

Yvette’s crazy life also involves a dating simulation gameplay element where she can romance a handful of suitors as well as women (yeah, it gets that crazy). Being her fiance is missing apparently gives her a pass to date other people. Who she chooses to see becomes intertwined with the main story, and boy, the story can’t get any crazier; you’ll just have to play it.

The best thing about Ambition: A Minuet in Power is that this is a visual novel that you don’t just play once (or twice or thrice) to see the ending and then put it to shelve. With the amount of things that you can do in the game, your playthrough will certainly almost be different every time. The big question is whether you can stomach the grind of getting credible, avoiding peril, obtaining money, going to parties, dating someone new, and figuring out where Yvette’s darn fiance is.

This review is based on a retail copy provided by the publisher.

Ambition: A Minuet in Power